After recognizing Jerry Coon and Action Tax Service for long support of D.A.R.E. and hearing from State Senator Peter MacGregor, Rockford City Manager Thad Beard gave kudos to the Department of Public Services. One of Rockford’s three wells had been down and could not be repaired. That well has now been replaced and is up and running as well as the Glenn Eagle water tower, which needed to be cleaned and painted.

Beard said the city is in the process of replacing all the old school light bulbs with LEDs. Throughout the city buildings, the hall, museum, library and schools the cost would be $22,000. “After rebates the bill is less than $9,000,” Beard said. He thanked the Department of Public Services for doing the research and paperwork for
the project.

A resident living on Bridge Street west of River Street said she was dissatisfied with the process of redoing the road there. She said her deed shows that she does own property to the middle of the road and felt she was not given input to changes that were proposed to her property. She said plans include removal of lilacs, 100 year old sugar maples and the creation of a retaining wall that will give her property a ten foot drop off to the sidewalk below. She said she felt her concerns were summarily dismissed.

City Planning Commissioner Cliff Hill, who was in the audience, said the farm market is in its second week of the season and he thanked the Department of Public Services for their hard work. “It looks like a million bucks, thanks Jamie (Davies, DPS Director).

There was a Mayoral Proclamation on the agenda for Reading Rocks in Rockford. The proclamation will be read Saturday, June 2.

Discussion of the Consent Agenda included the difference between Art in the Park (September 9) and another art event held by the Rogue River Art Association on August 4 (the same Saturday as sidewalk sales). The consent agenda was unanimously approved.

The main event of the evening’s meeting was a presentation of the city budget. Beard said some quick highlights include a very, very aggressive budget of street improvements. He said digital timecards being implemented by city staff will allow a more accurate tracking of everyone’s time. For example, in his case, the amount of time attributed to sewer and water was reduced by $55,000.

Beard said a major improvement for downtown will be the connection of the Arnie’s parking lot and Main Street that will add 82 parking spaces that will cost $313,000. Other capital projects include replacement of a failing seawall in Garden Club Park for $100,000, a Main Street sidewalk for $60,000. Heritage Park Nature Trail is slated for completion. A Heritage Park mill and fill will cost $418,000. A mill and fill on Main Street, from Lewis to Northland, will cost $123,000. Phase two to four in finding a new well location is budgeted for $190,000.

The city was also able to purchase a Mobile Digital Terminal and a Lucas machine, the automated compression machine that was recently instrumental in saving a man’s life in Rockford, in addition to the fast action by two young women.

“We didn’t have one. It was used to save a life here this year,” Beard said. He said most of the items listed came out of a new motor pool fund the city created.

Beard described that the city’s income comes from state revenue sharing “the money Pete gives us,” and taxable values. He said in recent years 2012 had the lowest, and increases have raised the general fund while at the same rate of 12.9 mills. 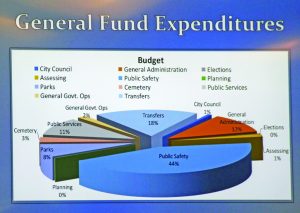 A pie chart showed the city’s spending through the annual budget. The largest item, at 44 percent, is public safety, which has been reduced through consolidation. Twelve percent is general administration, 11 percent public service, three percent cemetery, one percent assessing and zero percent elections. That was the conclusion of the budget presentation, followed by Steve Oosting, a representative of environmental engineering company Prein and Newhof, who discussed environmental ordinance work being done in local communities.

He told members of the council about development of new storm water ordinances underway along with 23 municipalities in cooperation with the Grand Valley Metro Council. The work has three goals: Flood Control, Channel Protection and Water Quality.

As development occurs, it tends to increase flooding downstream and the ordinances hope to address that. Channel protection is focused on the mitigation of erosion of stream banks. The State of Michigan has mandated new controls on the volume of water during storm events.

Finally, discussion covered water quality regarding erosion contributing to sediment in the storm water. Eighty-percent of sediment must be removed before storm water is released. A system of credits is being created to measure the amount of sediment in water. Systems such as rain gardens,  infiltration systems, vegetative swails, permeable pavement, all award credits toward sediment removal.

“This is finally coming to council from the Planning Commission. They have actually been working on this for several months, actually a very lengthy review,” said Beard.

Council then was able to ask questions about the ordinances. After which the public hearing for the ordinances was closed. It was moved by Cheryl Scales and seconded by Melissa Young to pass the ordinances and it was unanimously approved.

New business included discussion of providing water to some residents of Algoma Township. In the past there had been a public water service agreement with Algoma for the Wolven Ridge development, but it had some errors and was never executed. Errors included rates for the township residents double that of city residents. This rate inconsistency has been removed. That proposal was moved by Jerry Coon, seconded by Melissa Young and passed unanimously.

New Business Item B regarded rite of way for telecommunications with Verizon, which has 5,000 linear feet of fiberoptics within the city. They want to increase that.  Mayor Pro Tem Scales asked if this would include any tree removals and was told no. Beard asked how much is available in the City’s right of way and if the fiberoptics was aerial or below ground. Additions would predominately on Ten Mile and Northland Drive. Scales said tree removal would require a permit.

Department of Public Works Director Jamie Davies said the decision regarding trees “Would all be up to your discretion.”

“That’s scary. I’m not an arborist,” said Beard. The resolution was approved after being moved by Melissa Young and seconded by Jerry Coon.

New business Item C was to approve a bidder for the task of finding a new water source for the city. The search is expected to cost $40,000 this year and $190,000 next year. Beard said the future water source must not have a negative affect on the existing city aquifer. “It’s a lengthy process,” he said.

He described two goals, additional water source for future growth in the city and redundancy. The search can continue at a farther distance, but at a much greater cost, so the search is a balancing act.

Scales wanted to know if the water would be tested for chemicals and Beard said he didn’t know what she was asking.

“The P word,” she clarified. He said yes, it will be tested for that.

Scales wanted to know if the city has enough water now with its current source and was told we do. Davies explained, “We are nearing that magic number from the state requires for redundancy.” Awarding the contract to search for a new water source was moved by Cheryl Scales, seconded by Terry Konkle and approved unanimously.

Council heard which boards had and will meet before moving on to council comments. Scales said she wanted to address the concerns of the resident on Bridge Street regarding street work.

Beard said he had met with the resident and thought he had eased her concerns. He said the city could go back to the drawing board to address the concerns about the height of the retaining wall and other issues.

The resident stated she felt the meeting was mischaracterized and she was not happy with the transaction. Mayor Steve Jazwiec ended the discussion, saying it was more appropriate to have that conversation  with city staff, not during a city council meeting.

Scales complimented those responsible for the city budget. Jerry Coon likewise appreciated the budget. He said it was a lot of work, a lot of fine points and an excellent job. He thanked D.A.R.E. officers for all the work they do. Terry Konkle thanked everyone who attended the meeting and the Planning Commission for their hard work. He also thanked Beard for the presentation.

Mayor Jazwiec reminded everyone that Start of Summer was taking place before they meet again. Terry Konkle said RAM museum director Al Pratt was not present, but that the museum, after five and a half years, is now completely through Clarence Blakeslee’s photo collection.

Mayor Jazwiec said things are going well for the Michael Young memorial, He said it was nice to have had the article on the front page of the Squire.