Thor and Norrie have officially joined the John Ball Zoo family in a habitat located in the North America area near river otters and bears.

Thor is a five year old male. He comes to us from the Ft. Wayne Zoo, and was born at the NY State Zoo. He weighs approximately 30lbs. 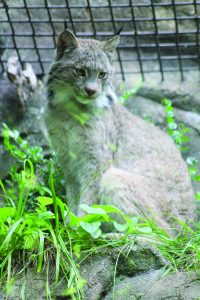 Norrie is a one year old female. She comes to us from the Cheyenne Mountain Zoo and weighs approximately 20lbs.

The Canada Lynx are similar to the bobcat but with a few key differences – a shorter tail with an all-black tip and no white, less spotted marking, longer back legs compared to their front, larger paws and longer ear tufts.

The Canada Lynx are a threatened species in the United States, which means they are vulnerable to endangerment in the near future. Both Thor and Norrie are part of a Species Survival Plan (SSP). Species Survival Plans are managed programs facilitated by accredited Zoo’s through the Association of Zoos and Aquariums that help to conserve species and maintain stable population in human care.

In the wild, their range includes Canada, the U.S. northern Rocky Mountains, northern Midwest and Upper New England, and Alaska. Colorado’s native lynx died out in the early 1970s because of trapping, poisoning and development. There is a reintroduced population in the Colorado Rocky Mountains, which has been a conservation success story.

Thor and Norrie help teach John Ball Zoo guests how interconnected the different plants and animals are in an ecosystem, and to highlight the conservation success story of their reintroduction into Colorado.

The Canada Lynx is protected and listed by the U.S. Fish & Wildlife Service as a threatened species under the Endangered Species Act. Landscapes with high snowshoe hare densities are optimal for lynx survival, reproduction, and population persistence.

John Ball Zoo inspires people to be active participants in the conservation of wildlife and our natural environment.