With one of Rockford’s most endearing homes up for sale, the City eventually will be welcoming new owners as it bids farewell to a couple who are eager to have another family enjoy “waking up in what feels like a bed & breakfast every day.”

That’s how Hollie and Tom Rademacher describe what it’s been like living the last 16 years at 226 Maple Street, a 19th Century architectural wonder that nods to both Italianate and Greek Revival. It is being offered along with a splittable lot for a total of nearly 1 acre, making it one of the largest – and arguably most attractive – properties in town.

“It’s going to be tough to leave Rockford,” says Hollie, who is the great-great-great-granddaughter of Smith Lapham, who originally founded Rockford in the mid 1800s as ‘Laphamville.’

“But our three sons (Thom, Patrick and Andrew) have flown the nest, and a 5-bedroom home is better suited to a growing family.” 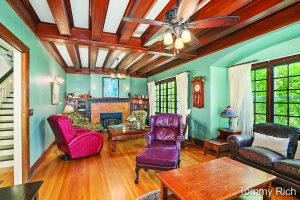 Hollie retired this summer from 39 years of teaching, mostly with East Grand Rapids Schools. Her husband Tom worked more than 30 years as a reporter and columnist for The Grand Rapids Press. Their plan is to move from the gracious digs on Maple Street to a lakeshore property in Oceana County, where Tom will continue his work as a freelance writer.

“We know we’re going to enjoy living near the water,” says Tom, “but we’re already predicting that we’ll miss being able to walk to virtually everything Rockford has to offer – the library, its parks, the Rogue River, the White Pine Trail, and of course, all its incredible shops and eateries.

“But most of all,” he emphasizes, “we’ll miss being 80 miles from so many great friends we’ve made from the Rockford area. Our standing joke is that if we get cabin fever, we may be coming back to haunt them for a spell during the winter.” 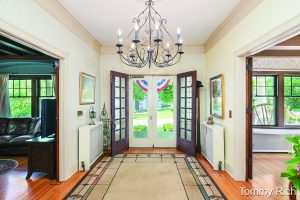 The Maple Street home was built during the 1860s, and features a grand staircase, hardwood floors throughout, coffered ceilings of old-growth oak, leaded-glass built-ins, two fireplaces, a spacious kitchen and plenty of rooms to serve as offices or craft areas.

The basement, which boasts its own walk-out entry, formerly served as office space for two physicians and their families, most recently Kent County Medical Examiner Eugene Kramer. The Rademachers bought the property from the late Dr. Kramer and his surviving
wife Florence.

“The Kramers did an incredible job of maintaining the home,” says Tom. “We’ve tried our best to follow in their footsteps, realizing that this place serves as a legacy property that bows to a bygone era.”

The home is listed with Rockford RE/MAX United, at $475,000. The price reflects the option a buyer would have to split off a parcel at least 60 feet wide and more than 200 feet deep – a rare find within the City limits.

“While the home sets beautifully in the middle of the property, a buyer could recoup a significant amount of their investment by selling off the lot, or building another home adjacent to this home,” says Tracie Rich, the listing Realtor.

To tour the home by appointment, contact Tracie at (616) 443-9041 or tracierich@remax-rockford.com