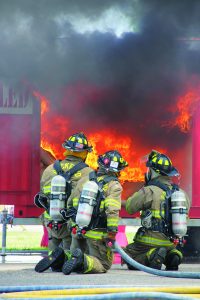 Rockford firefighters as well as participants from area departments saw first hand the differences in fighting fire in a home with a fire suppression system versus one that does not have the system installed.

On Wednesday, July 11, a specially designed trailer from Saugatuck was loaded with donated furniture and household goods and lit up. One side has a sprinkler system installed and the other does not. Fire Safety officer Ken Phillips narrated the day’s training, which began with a round table briefing within the main office of the Department of Public Works compound in the industrial area in Rockford.

Monthly training keeps firefighters up to date on a variety of potential scenarios, and each begins with a briefing on what to expect in that day’s training. Here Phillips assigned duties to different officers while telling observers what to expect. 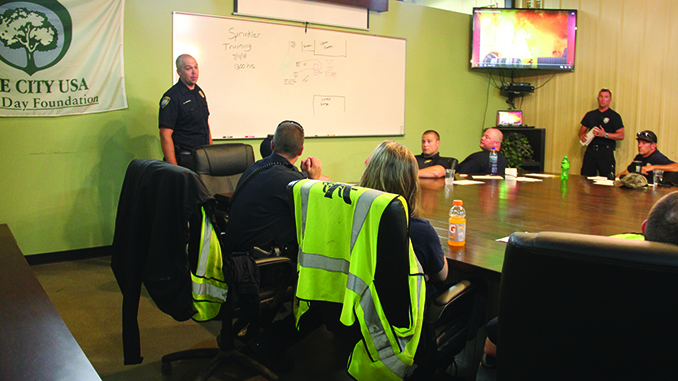 “When a suppression system kicks in, see how quickly the temperature drops within two or three minutes,” he noted. He assigned teams to fight the non sprinkler side of the demonstration unit while the sprinkler system side is allowed to go out by itself.
“Don’t worry that you won’t have a job if people have these systems, they will still need firefighters,” he explained. “The idea behind suppression systems is it is safer for occupants to get out. Don’t be upset, we won’t be out of a job.”

The training was planned strategically as part of fire prevention week. Chiefs from Courtland and Algoma fire departments were on hand to observe. 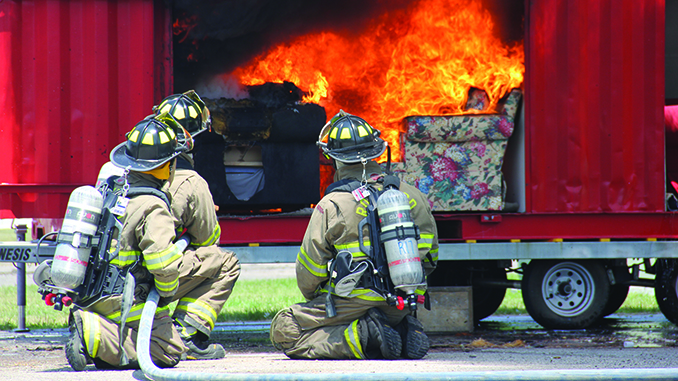 “We want to make this a big deal for residents building homes,” he stated. Often new home are built without fire suppression systems because of untrue conceptions. In 2013 firefighters responded to 1,240,000 fires. There is death from fire every two hours, forty-two minutes in the United States. 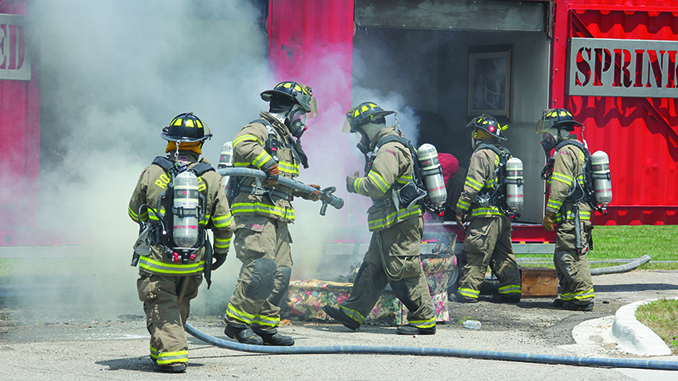 If a home is built with a fire suppression system, the chances of homeowner death goes down by 80 percent. The systems also reduce property damage due to a home fire by 70 percent. At a cost of just $1.35 per sprinklerhead when put into a new home, it seems like a clearly life and cost effective expense. 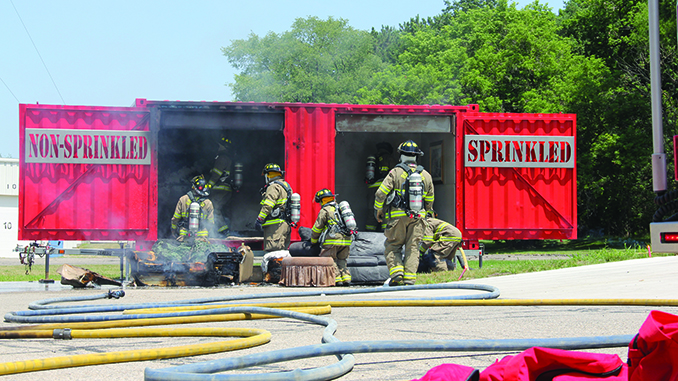 Shortly after the 1 p.m. training session began, the two halves of the trailer were set on fire and the following demonstration was dramatic. In two minutes, forty seconds the side without a fire system reached an unsurvivable 1200 degrees while in one minute, three seconds the fire was out in the sprinkled side of the trailer. Thermal imaging was used to measure the temperatures in the flames on both sides of the structure.

For good measure the firefighters repeated the demonstration with the same general results.

A fact sheet describes some of the myths that may discourage fire suppression systems in new home building. People believe smoke alarms provide enough protection, which is false. They alert occupants of the danger of fire but do nothing to extinguish a flame. Another myth, newer homes are safer homes. False. In a fire, lightweight construction materials burn quicker and fail faster. Synthetic material used in newer construction can also cause a more toxic environment, greater fuel load and faster fire propogation. 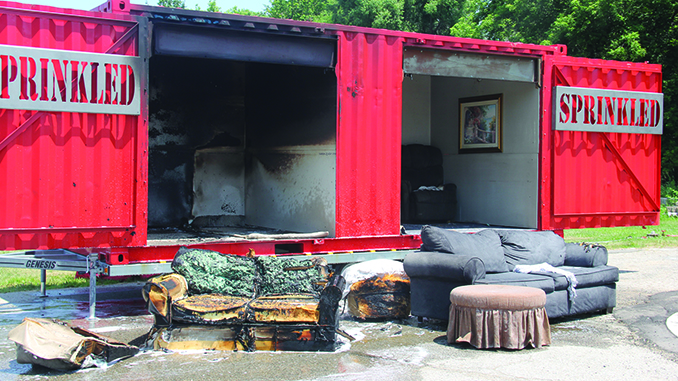 Home fire suppression systems often leak or activate accidentally. False. Leaks are rare and happen no more often than leaks in plumbing systems. Sprinklers activate from heat changes, not from smoke. They do not activate in response to smoke, cooking vapors or the sound of a smoke alarm.

When a fire occurs, every sprinkler will activate, causing water damage. This is also false. Only the sprinkler closest to the fire will activate. In most cases, only one sprinkler activates, leaving the rest of the house dry.

Sprinklers are unattractive. No. Sprinkler models are very unobtrusive and can be mounted flush with the ceiling or concealed. (Editor’s note, we have a sprinkler system in our building and we didn’t even realize that until after being here about five years when a firefighter pointed it out.)

Sprinklers are not practical in colder climates as the pipes will freeze and cause water damage. False. With proper installation pipes will not freeze.

Water damage will be worse than fire damage. No. Sprinklers quickly control heat and smoke. Any water damage from a sprinkler will be much less than damage caused by firefighter’s hoses. Fire departments use ten times as much water as a sprinkler system would have used to extinguish the same fire.

Find out more information at www.homefiresprinkling.org.