The summer archery season is heating up, quite literally.  Archers at several outdoor tournaments at the WMAC have braved some hot weather to compete this season.

In May & June, the WMAC hosted two ASA outdoor 3-D tournaments on the Wynalda 3-D Course, where competitors were challenged to find clear paths through the woods in order for their arrows to strike lifelike targets.  The State ASA shoot is at WMAC July 21-22, and an IAA 3-D tournament will be at WMAC the weekend of August 19th.

The weekend of June 23, the WMAC hosted the Meijer State Games archery tournament, which featured over 60 archers of various ages and divisions competing in a 144-arrow competition.  This tournament has become an annual tradition at WMAC and, before that, at the Freshmen Center.  Local archers did very well, with several golds taken.

The weekend of July 7th, WMAC hosted the Society for Archery in Michigan (SAM) outdoor tournament.  This event featured an Olympic-style single distance qualifier, in which archers shot in their respective divisions.  The second day of the tournament featured 1-on-1 single elimination to determine the gold medal winners from each division.  Many local archers achieved golds, including Brianna Laux, Glenn Meyers, John Gardner, Tim Westphal, Peyton Segard, Mei Hauenstein, and Jackson Ratajczak, among others.  On Sunday, gold medalists competed head-to-head for the “King of the Hill” title – which featured a championship belt for the winner!  Brianna Laux was this year’s SAM King of the Hill.  You can spot her wearing the belt around town. 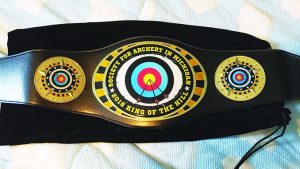 At the beginning of the SAM tournament, the first annual WMAC Scholarship was awarded to Mei Hauenstein of Howard City.  Mei has shot at WMAC for several years, and plans to attend Michigan State University next year.