Fur Bearer Specialist Adam Bump of the Michigan Department of Natural Resources said he is not completely sure about the identity of our chupacabra of last week. He said the animal is likely a young coyote with mange, but he can’t be sure. He said most animals reported to authorities as a chupacabra are either coyotes or foxes with mange.

Animals in the wild often recover from mange, he said. It is when they are about to recover from the illness that they look the worst and alarm people. “They lose their hair, they get sunburned, their skin can appear almost black or shiny blue-black,” he stated.

“A lot of people use it as a joke,” he said of the chupacabra. It’s like Bigfoot or Sasquatch. It’s never been verified they exist.”

We beg to differ. If pictures are worth a thousand words, the above picture of a chubacabra says it all.

The photos of the alleged chupacabra of Greenville generated a lot of response from readers last week.

Discussions went in several directions with some people guessing that the creature was sick mangy coyote, others sharing stories of seeing similar looking animals, and some claiming that they too have seen a chupacabra.

What we can say for sure is the saying “you don’t see that everyday,” can apply to our own backyards.

What follows are our readers responses.

• A sickly coyote; not a fictional Beast

• Looks like canine icthyosis or seborrheic dermatitis.  Compare it to online images.

• “Well I hate to tell you but whatever that is in the paper, I saw the same thing about 2 years ago on Coit at night.  I also did not know what it was but the person I was with said “oh my gosh, that’s a Chupacabra!”

I am a perfectly rational, 64 year old woman.  After we looked it up and I was shown pictures of it, that is the only explanation I can come up with.  This makes me even more sure of what I saw.  Once you see one, you won’t question it anymore.  It has an absolute definite appearance that you cannot attribute to anything else.

We were on Coit between Jupiter and 4 mile, closer to the gravel pit.  I was surely not wanting to stop and get a better look!  It had a scary strange look to it, like you should just leave it alone and hope it doesn’t come to your house. Very strange.

• I was on Belding Road (m44) sometime around two in the morning halfway between Ionia and Belding, so it’s a pretty empty stretch of road that time of night, when I caught the flash of my lights hitting an animal’s eyes. It was in the bushes heading toward me from the side of the road. Not wanting to smash into a deer in the middle of nowhere I slowed down to a bear crawl. Figuring that would be safer for me and what I thought was a deer.

Until into the road came something. And that’s the best word I can use to describe it. It was too small for a deer or coyote. Too big for a dog. It was clearly canine but moved like a deer. But slowly and without a care in the world.

• And finally a reader from Belmont shared with us some of their own photos. They wrote, “I took this about a week ago at the pond on Grand View Condos in Belmont.” 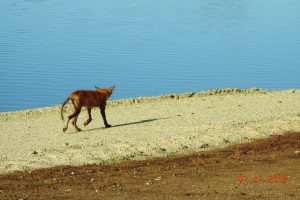 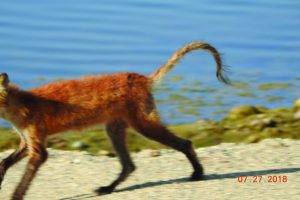