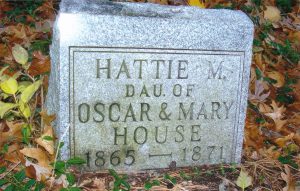 As part of a recent “Nugget” quiz, readers were asked whether the following statement was true or false: “Hattie House, a Julia Moore subject, is buried in “Pioneer Cemetery”. The answer was true, but it has been brought to my attention that some may not know who Julia Moore is and how Hattie House became one of her poem subjects. In the Rockford Area Museum (RAM) there is a showcase devoted to Julia Moore (1847-1920), who, in the late 1870’s was a well- known poet both locally and nationally. Many of her poems were about people and events from our area because she spent about half of her life living here.

Often her poems were about the deaths of those in her community or in her own family. Part of her fame and notoriety was because of the tragic topics she used. She was often criticized for the structure and rhyme in her poetry, but her poems were to be sung. They were set to the rhythm of a song and she would sing them during live performances. For that reason she was called “The Sweet Singer of Michigan”.

The poem “Hattie House” was one of her death poems. My first inclination was to use the poem in this column, but instead will include a photo of the head stone and simply tell readers that Hattie died suddenly one morning while playing with friends. She was almost six years old, and her death left many to deal with shock and sorrow. The gravestone looks new, so I believe that possibly there is a story connected with it as perhaps a replacement of the original stone. Can readers add more information?

Julia Moore wrote several short poems about her life in our area, and I will use some of them in the next couple of columns. They are a part of Rockford history. Here is a selection:

One mile south of Rockford,

Upon a little farm,

It was there I was born.

My parents they were poor—

The country then was wild –

Oh! How dearly I loved them,

My parents kind and mild.

Sad and happy thoughts will ever

In my memory remain.

It was in the town of Plainfield

My parents then did dwell—

There I lived my early childhood,

As my relatives can tell.

I went to school at Rockford—

It was then called Laphamville—

To the dear old village school-house,

And it I remember well.

How often with my schoolmates

Played under a tall pine tree,

That stood beside the school-house,

I have not forgotten thee,

My happy childhood days are gone,

So are my playmates too:

We are traveling life’s journey

To reach the other shore.

Next week a poem entitled, EARLY DAYS OF ROCKFORD, will be part of the column. As always, please contact me with questions, comments, information, suggestions and corrections. Have a great, positive week!