The day and setting could not have been more beautiful for the dedication ceremony of the Michael F. Young Waterfront held on the banks of the Rogue River in downtown Rockford Saturday, September 28.

Downtown was already buzzing with activity at 10 a.m. but many gathered for a pause, remembrance and appreciation for the city late manager Michael Young. Former and current mayors, state representative, friends of the family and Michael’s widow were gathered on the Garden Club Stage to speak. Chief Dave Jones introduced speakers, beginning with the current Rockford City Manager Thad Beard.

He began with a quote from the late John McCain:

“Every day, people serve their neighbors and our nation in many different ways, from helping a child learn and easing the loneliness of those without a family to defending our freedom overseas. It is in this spirit of dedication to other and to our country that I believe service should be broadly and deeply encouraged.”

He said Michael was the example of a dedicated public servant who made a tremendous impact to this great community of Rockford. Beard said he knew Michael as a fellow city manager as well as a leader and President of the Michigan Managers Association and as a friend.

Past Mayor and current councilman Jerry Coon spoke next. Coon was mayor when Michael died unexpectedly on January 27, 2016. “Michael took a long view of things.” He thanked sponsors and committee members who made the Riverfront memorial possible, “As we thank Michael on behalf of the work he did for here for us in Rockford.”

Superintendent of Rockford Public Schools Dr. Michael Shibler began by saying over 20 years ago he and Michael developed a strong and lasting relationship. “Michael was certainly dedicated to Melissa,” he added that now Michael has a grandson, Owen Michael. Michael helped Rockford develop a strong reputation as a destination city, which was not an accident. Shibler said he has served here in Rockford now for over 30 years working toward improving the city and Rockford Public Schools and efforts have proven results. 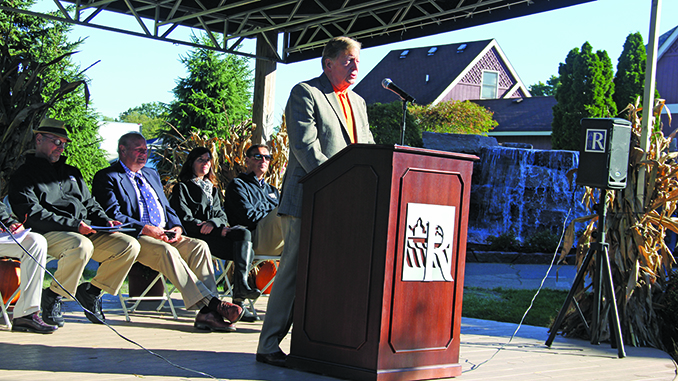 “The charm of Rockford is real.” Shibler said many people who live in the surrounding townships rightly consider Rockford their town. He called Michael a visionary leader who had an outstanding focus on doing the right thing. He said many times he saw people go into Michael’s office very upset about something and leave smiling. Michael built a community that was confident, which is not the status quo all over Michigan.

“Michael loved athletics,” Shibler described. He said Michael volunteered as assistant wrestling coach during his years here. He ended by saying, “I know we all miss Michael but his legacy is all around us everyday. Gold bless you Melissa Young, bless you Michael Young.”

State Representative Rob VerHuelen spoke next. He said he and Michael served together on the Metro Council and his passing was a tragedy for the entire West Michigan region. “It is with great respect and a heavy heart we remember Michael Young. It cannot be understated how he worked diligently to make Rockford a wonderful place to live, work and play.” He listed some of Michael’s projects: a new streetscape for downtown, work on the Grand Valley Metro Council, the creation of the new sewer plant and a whole list of other amenities in his roles as husband, father and friend.

Mayor Jazwiec likewise had much to say about his knowledge of the late city manager. He said Michael always wore something with the Rockford logo on it, and in honor of him he was doubled up with Rockford logos today. “I think of him as Mr. Rockford. He always greeted you with a big smile, a strong handshake and a bump like a wrestler. He was a great family man. He served unselfishly.”

He knew Michael well from Jazwiec’s 18 years on city council. “He was a great collaborator and a great negotiator. He had great vision. He made Rockford a wonderful, walkable community. He could make things happen. Jazwiec said he remembered bringing Michael the idea of a Celtic Festival in Rockford and the idea flourished here for many years before relocating to Sparta.

“He volunteered to be the bartender at the first one,” Jazwiec said. He said he also brought idea of the Blues Series to Michael. He talked Michael into dressing up with Jazwiec as the Blues Brothers. “He ended up stealing the show,” Jazwiec said. “He said Have you ever heard of a wish sandwich? It’s when you have two pieces of bread and wish you had some meat.”

He watched Michael jump in the river during Sweetheart Splash with his good friend Tom Rademacher for ten years in a row. Michael supported Open Mic night and played there once with his good friend Big Jerry (Michael played the musical instrument the Egg). He supported starting Praise in the Park and was a big fan of the annual holiday Lighting Ceremony. “We butted heads on how long the Christmas lights stayed up. I wanted them taken down after the new year, but inevitably they stayed up into February. He wanted them up because Christmas was his favorite time of the year.”

“Culture is how a place feels. Here there is a great quality of life. He was one of the most respected city managers in the state of Michigan. The Rogue River held a special place for Michael. From the waterfall you have a view of the stage here, the dam, recognition plaza, the former water treatment plant site.  This view is a gathering place and a treasure. His vision has held true to form.

Jazwiec and Coon then stood and together as Rockford mayors, shared the reading of the plaque for the Michael F. Young Memorial Riverfront. The plaque is at the head of a beautiful granite and sandstone fountain newly installed in Garden Club Park. 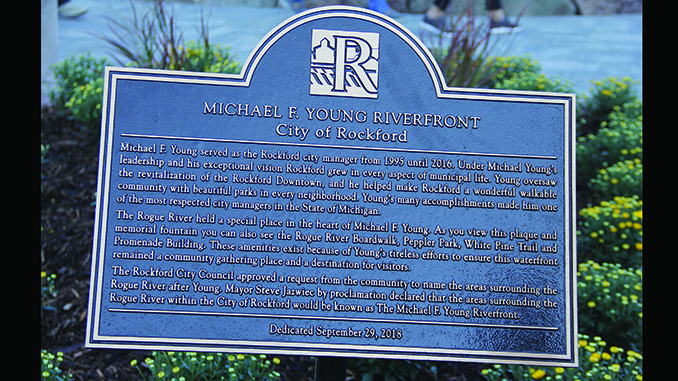 It reads: Michael F. Young served as the Rockford City Manager from 1995 until 2016. Under Michael’s leadership and his exceptional vision Rockford grew in every aspect of municipal life. Young oversaw the revitalization of the Rockford Downtown, and he helped make Rockford a wonderful, walkable community with beautiful parks in every neighborhood. Young’s many accomplishments made him one of the most respected city managers in the State of Michigan. The Rogue River held a special place in the heart of Michael F. Young. As you view this plaque and the memorial fountain, you can also see the Rogue River Boardwalk, Peppler Park, the White Pine Trail, and the Promenade Building. These amenities exist because of Young’s tireless efforts to ensure theis waterfront remained a community gathering place and a destination for visitors.

“Michael began his tenure with Rockford in December 1995 at age 28,” said Jazwiec. “He worked tirelessly over 20 years to create the brand we enjoy today. In 2000 he built the new waterplant. In 2005 the sewerplant was finished, complete with a flying pig weathervane because the then manager of Grand Rapids said ‘You will build a sewer plant when pigs fly’.”

“He built a strong future foundation to promote the Rockford way,” said Coon.

“He served on many boards and commissions,” said Jazwiec. “They enhanced the quality of life for all of Rockford and beyond.” Michael passed away on January 27, 2016.

Melissa Young, Michael’s wife, was the final speaker. “I can’t believe how important and special this day is.” She said she and Michael knew each other since junior high. “So many things he did I thought he couldn’t do, including marrying  me.” She said she told him once that she wanted to live and raise their kids in Rockford and he made that happen at age 28. She said once he helped her dad build a fountain in his back yard and she didn’t think it would work, but Michael knew it would. “He made things work. He made it happen.”

“This is such a fitting tribute to him. You have no idea what an incredible support system this community has been over the past two and a half years.”