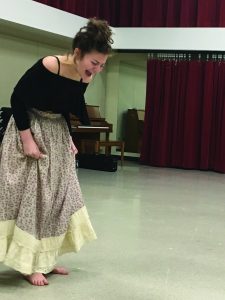 Arthur Miller’s ‘The Crucible’ a timeless story of guilt

Kaelynn Earnest, Theater Director at Rockford High School, hopes everyone will take advantage and see this year’s production, The Crucible by Arthur Miller, playing in the school auditorium Thursday, Friday and Saturday, November 1, 2 and 3 at 7 p.m.

Earnest said she chose the play because it reminds her of the current climate in the United States, and highlights the repetition throughout history of human nature and what we do to our communities.

The play was written my Arthur Miller during the times of the McCarthy hearings, an intense, riveting time in America’s history. Those trials reminded Miller of the Salem witch trials and the storyline is set then. With today’s social media influence and finger pointing, this American classic should stimulate introspection and thought.

“It was time to do a drama again,” Earnest stated. Students in the theater program have just four years of high school, so working on several different genres gives the participants a depth of experience through comedy, drama, classic and contemporary plays.

Last year was a musical comedy, Zombie Prom, with a 1950s setting. That play won state awards for costume design, lighting design and set design. Rockford already had a variety of 50’s style skirts and Earnest chose bright, coordinated colors for
the production. 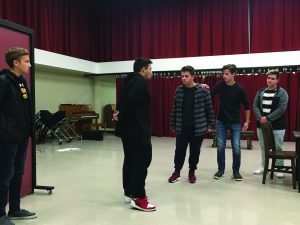 Likewise, for this year’s play the school already has on hand a good portion of clothing that could, with small changes, represent the style the Puritans wore during the era of the trials, which ran from spring of 1692 to May, 1693. Other costumes and set material are either adapted, outright created or borrowed or rented from other production companies.

“There is a great network of theater community here in West Michigan,” Earnest described. Different high school programs, other theaters, such as the Civic and Circle theaters, share material between them as needed. “We have to be budget-friendly.”

“The play is not designed to be completely historically accurate,” Earnest said. “It is intended to examine how people deal with guilt and struggle with power.” She said the play makes such retrospection accessible to viewers who can relate to the individualized tragedy of John Proctor’s story. However, the distance of time, over three hundred years ago, allows the audience to also disconnect for more comfortable observation. “The audience can relate but also observe.”

Not that the Crucible is comfortable. Written in 1953 the play reflects a vivid and painful legacy in American history. The horrors of the witch hunts of 1692 saw men and women accused of bewitching their neighbors and many of them lost their lives at the hands of their fellow townspeople. Miller considered the McCarthy trials as an allegory for the anti-Communist “witch hunts” of his day. 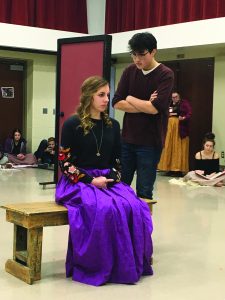 Earnest also chose the production for its large cast, which will highlight the hard work and impressive talent available here in Rockford. Auditions took place the second week of school with practice every day from 3:00pm until 5:30 to 6 p.m.

“It’s one thing to get the lines memorized, it’s another thing, and more fun, to embody the character and bring the story to life.” She said the students are also learning to utilize acting techniques that deliver deep, realistic performances.

“The audience should expect to learn more about themselves and about human nature,” she said. “History repeats itself. We do the same stuff to each other over and over again. With social media and finger pointing, reputations are ruined to devastating effect. It is the timeless story of guilt and power. The Crucible illustrates what happens when a community rationalizes the preservation of what they perceive to be desirable qualities of its members, all the while losing track of what is actually important and good.”