Bernie Bennor, a resident who lives off Ten Mile Road, is angry at the utility company that cleared trees on his property this month to protect overhead lines. Bernie believes they are required to come back and clear the debris left in the wake of their work and he said they told him they don’t do that. 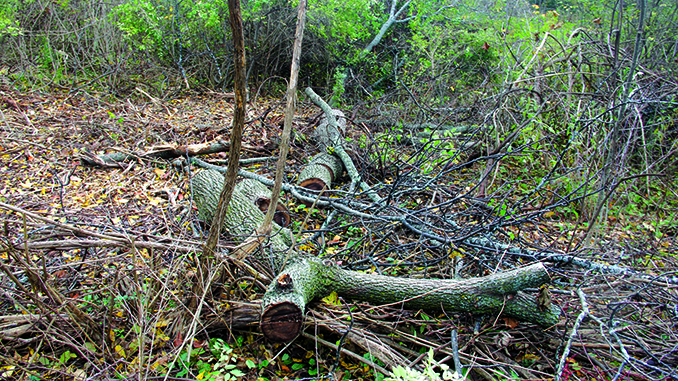 Bernie said his last two phone calls to complain to the company resulted in hang-ups by them to him and he has initiated legal action. Bernie said some of the wood they cut has been stacked for his use, as he requested, but other large pieces were left. They are clearly too big to be moved without heavy equipment and he will have to cut them and move the pieces from the swath of wood debris and tire tracks in his front yard.

Bernie’s house is set back off Ten Mile and the wooded buffer the trees provided helped shield the sound of the busy road out front. Now he says the vehicle noise is obnoxiously loud. In addition, ruts of the tire tracks from the machinery used to clear the trees have exposed the lines of other, underground, utilities. He is mad they didn’t call Miss Dig before gauging up the wooded area.