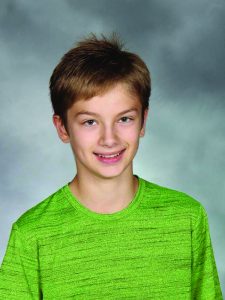 Dalton Lewkowski, 6th Grade, is the son of Dan and Jennifer. He also has a cat whose name is Tiger. Dalton loves do a wide range of activities including hockey, reading, fishing, chemistry, video games, attending church and spring football. His favorite class is science with Mrs. Altizer and he also loves the color blue and the Unwanted series of books.

If he could travel anywhere in the world, he would choose to travel to somewhere in Europe but isn’t sure where. When he is older, he would be interested in being an engineer or an architect.

He is proud of having really good grades in school and the people he admires most are his dad and his uncles because they serve the community as police officers. 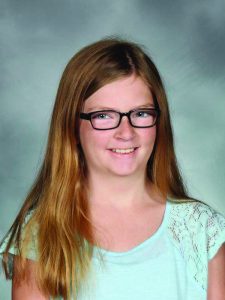 Gwen VanStensel, 6th Grade,  is the daughter of Dave and Kristen. She has two sisters named Megan and Elise and also has two dogs named Calvin and Hobbes. Some of the activities that Gwen likes to do are reading, writing, baking, gardening, biking and hanging out with friends to play board games. Gwen’s favorite class is Engligh-Language Arts. She also loves 80’s music, the color green, oranges and her favorite holiday is Halloween.

The dream vacation that Gwen would like to go on is either to Hawaii or Alaska for an entire month. When she is older, she would love to explore a career as an author or in business.

The person who Gwen admires most is her grandma, Mimi, because she is kind and always helping other people. She is also really proud of her book collection! 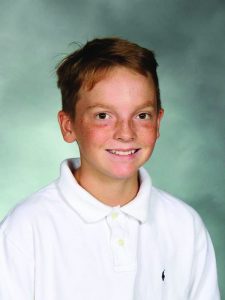 Jack Lockwood, 7th Grade, is the son of Matt and Debbie Lockwood and he has one brother named Alec who is in college, and one sister named Every that’s a senior in high school. He also has one labradoodle named Norman.

Jack plays several different sports including football, basketball, baseball, and tennis. Even though he plays a lot of different sports, his favorite is baseball which is the sport his brother and dad plays. His favorite class, which is one that he appreciates because of the challenges it provides, is math. He also loves the unexplainable taste of fajitas and has them every Tuesday!

His dream vacation, since he is an avid baseball fan, is to head to Fenway Park. The person he admires most is Jackie Robinson because he stood up for what he believed in, even when it was challenging. He wants to be in politics one day and he also is a huge Spartan fan! 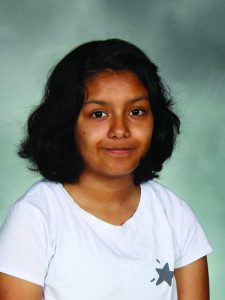 Camila Lepe Monge, 7th Grade, is the daughter of Cristy and has two cats named Reese’s and Snickers. The irony with those cats names is that she doesn’t like chocolate at all! She also has two younger cousins that aren’t her siblings but are really close to her. Camila does karate,  and likes volunteering at Warchest downtown because she enjoys hearing what the customers have to say. Her favorite class is English because she gets to write and read a lot! She enjoys pretty much any food and her favorite colors are black and sky blue. Her future dream job is to be
a criminologist.

Camila really admires her mom and aunts because of all the things they had to go through, like poverty and the war and they still have the courage to raise
their children. 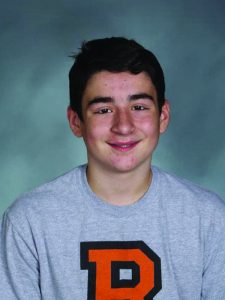 Paul Trottier, 8th Grade, is the son of Terry Mann and Mark Trottier. He is the sister of Zozo and has a dog named Nora and two cats named Tina and Phillippe.

Paul plays lacrosse and basketball and his favorite class is gym class. He is an avid athlete and loves to play all kinds of sports! His favorite food is burritos and he likes the color purple. For reading, he loves the Harry Potter series. He isn’t quite sure what he wants to do when he graduates, but he wants to make sure he keeps his options open so he can explore all different career types. He admires his YMCA basketball coach because he brings out the best in everyone. He is most proud of his grades this year and he hopes to keep them up for the rest of the year! 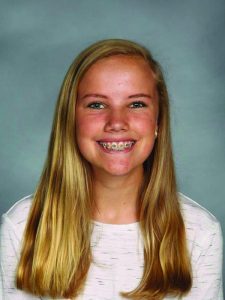 Jessica Mulder, 8th Grade, is the daughter of Christine and Brian and she has two brothers named Jake and Zack. Jessica also has two dogs! She loves to learn about our country, and that is why History with Mr. Reedy is her favorite class in school. She is involved in soccer, tennis and band, where she plays the saxophone! Drawing and reading are also some of her hobbies. Her favorite food is pasta and she loves the Harry Potter series.

Jessica would love to be a surgeon when she is older, and she would also like to visit Bora Bora if she ever got the chance! Her mom and her dad are two people who she admires because they work hard to provide for her entire family.