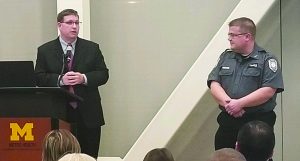 Most first responders will tell you they do the work they do because they love helping people. Recently several Rockford Ambulance Emergency Technicians were presented with awards recognizing their impact in an extreme situation where their skill and amazing ability definitely did make a difference in people’s lives.

Rich Keizer and James Wright were on duty February 10 of this year when they were called to help a mother in labor. While transporting the mother to the hospital, they ended up helping her deliver her baby in the vehicle.

Aaron Barrigar and Olivia Narwot of Rockford Ambulance also were called to the scene of a very pregnant woman already in labor. While they were there in what is described as “a very chaotic scene” the woman delivered her infant with their help.

Tim Armstrong if the Chief Operating Officer for Rockford Ambulance. He has made a strong impression with patients he has treated and in the job he does day in and day out. A co-worker, Chad Cook, wrote the following about Armstrong:

Tim Armstrong exemplifies leadership on a daily basis and should be held up as an example to others in similar postions. Tim focuses his time and attention on things that really matter. He was instrumental to adding the Stryker power load system on our trucks. Tim’s motivation was to reduce injuries and extends the careers of us more experienced providers. He actively listens to his people and communicates a clear vision of what Rockford Ambulance could be and where it’s going.

Tim’s easy-going affect and willingness to stay connected to his people has created a culture of emotional safety in the work place. The employees have responded well to this and it is evident by their positive comments about Rockford as a company and the direction that it is heading. I hear employees of Rockford Ambulance and even other companies commenting on a regular basis that Rockford Ambulance is quickly becoming the place to work in Kent County. It is said that “attitude reflects leadership-Captain.” Tim’s leadership is the catalyst for this amazing turnaround and as such he is worthy of this award.

Four area first responders were recognized with a Life Saving Award. Tory Bushy and Shawn Morton, of Rockford Ambulance, and John Elliot and Nick Grady of Solon Township Fire Department all responded on June 2 to a cardiac arrest in the Solon Township response area. For the fire department personnel, this amounts to their first cardiac arrest save. The teamwork between the first responders and ambulance providers allowed this patient to be discharged from the hospital with a
favorable outcome.

Chuck Premer, of Rockford Ambulance, had all good things to say of each of the individuals who were so rightly recognized for their good work. He called the devlivery of the babies a dramatic situation.

“Bringing life into the world is one of the most significant and special moments in people’s lives. We are honored to share in that moment.” He praised Armstrong for his hard work and positive impact on the company. He said the joint effort between first responders from the Ambulance company and the fire fighters is likewise an example of teamwork of the most impressive and important type. Every one of the individuals should be proud of the impact they make every day in times of great need in a person’s life, but most especially in these incidents that show how lucky we are to have such selfless and amazing people on the job of looking out for all of us.