All members of the Rockford Area Historical Society (RAHS) receive, through the mail, our quarterly newsletter, “Power House Post”. It contains information regarding history, current activities, projects and other news. In the October edition, the museum’s  two  researchers and archivists, Pat Frye and Jennie Griffee, asked members for help in three areas. They were: (1) Photos or other information dealing with the demolition of  the Wolverine offices and Pig Procurement Plant on Main Street; (2) Information and photos of the Sunoco Gas Station that was on the Northeast corner of Fremont and Division Streets and (3) Photos and information on Brownell and Algoma Central Schools. Perhaps readers can help. If so, please contact them at the RAM (616-866-2235). 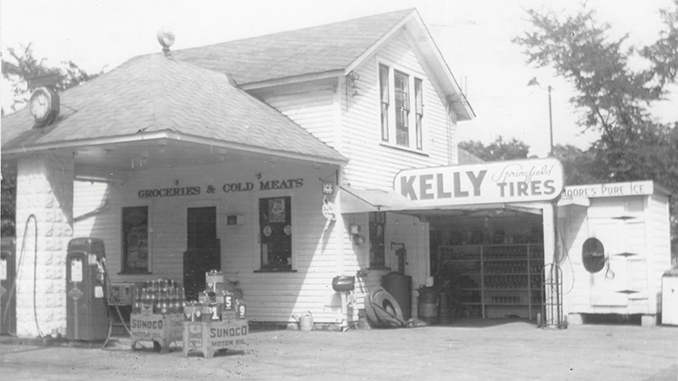 One of the RAHS members,  Nancy Fisher Patterson (RHS Class of 1957), has already responded to the Sunoco Station request. She sent a nice note along with several pictures. One photo shows the A & E Sunoco station as it was in August of 1951. The gas pumps can be seen along with two Sunoco display boxes. The writing above the door and windows reads “Groceries & Cold Meats”. One can see that the station also sold Kelly Springfield Tires and Moore’s Pure Ice. Nancy pointed out the outboard motor leaning against the corner of the building. 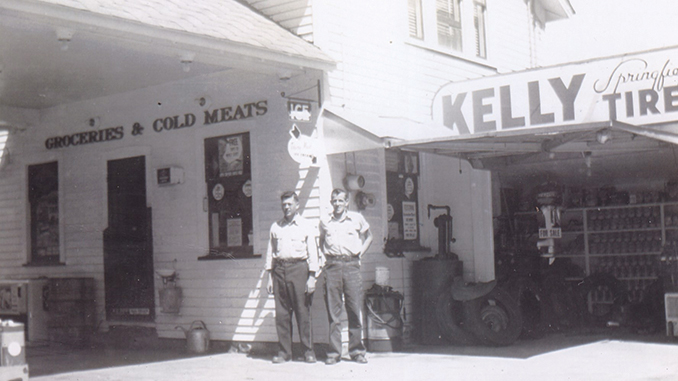 A second photo, taken closer to the building, has two men in it. Nancy has identified them as A.O. Richardson, one of the store owners, and Gordon Weaver an employee. She also mentions that Mr. Weaver served in World War II and came back home with war  related  respiratory problems. He and his family lived in a basement home on Ten Mile Road.

Picture number three, taken in 1952, shows the two gas station owners standing on a pile of snow. They are (L-R) Ed Fisher (Nancy’s father) and A.O. Richardson. The following was written on the back of the picture by Nancy Patterson: “Ed  &  A.O. bought the station from a Mr. Francis, who owned the Colonial Motel. Before Francis it was owned  by a Mr. Helmer.  Richardson’s and Fisher’s both lived in the house attached to the station. The wives manned the store and the husbands pumped the gas. That’s Bloomfield’s house behind them.” 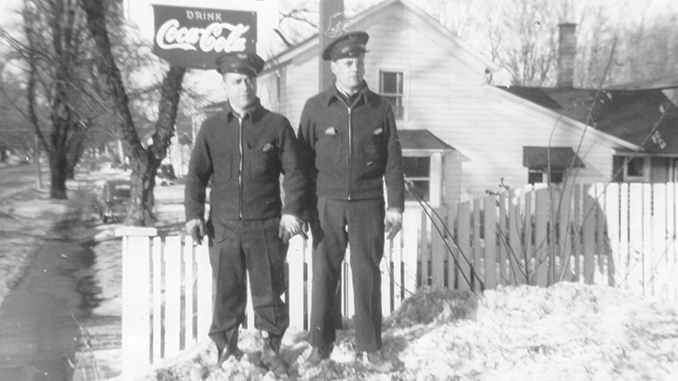 When I came to Rockford in 1960, the station was active and I often got bread and milk there. I also think I bought newspapers from the store. Today (2018), the renovated building is still there. I am sure that some readers remember the station. If so, contact the museum with your information.

My thanks to Nancy Patterson for sending the material and adding identification and history and to Jennie Griffee for letting me use it in this column. As always, readers can contact me by email (tnjkonkle@hotmail.com) or phone at 616-866-0530 with comments, concerns, questions or corrections. Have a great, positive week!