The City of Rockford’s audit covering fiscal year July 2017 to July 2018 was ready months ago, but the presentation of it took place during the final regular City Council meeting of the year in order, in part, to inform the newly-elected council. Rockford City Manager Thad Beard said there were no surprises in the annual audit, which was presented by Peter Haefner of Vredeveld Haefner, LLC, on Monday, December 10.

“Rockford follows acceptable accounting standards, that’s the highest opinion,” he stated. He said financial highlights include the state of Rockford’s bonds, work on streets, the addition of vehicles to the city’s fleet, and comparing the budget to last year.

His presentation was accompanied by several slides, and Beard offered some explanation of each of the graphs. Beard said overall the city has a very good fund balance and is very detailed and accurate in record keeping.

“Basically we accurately represent where we are with the funds.” He said Haefner typically characterizes Rockford’s audit as a straightforward undertaking compared with some other municipalities because the records are complete and well-kept.

Highlights include the completion of significant capital improvements this past year with three complete road projects and several less comprehensive road improvements. Beard said he is very relieved to have those projects done. “Talk about making people upset, tear up three streets at one time.” He said the city sold $3 million in bonds to cover the cost of the improvements as well as using an increase in taxes, up 10.9 to 12.9 mills, to pay for the work. 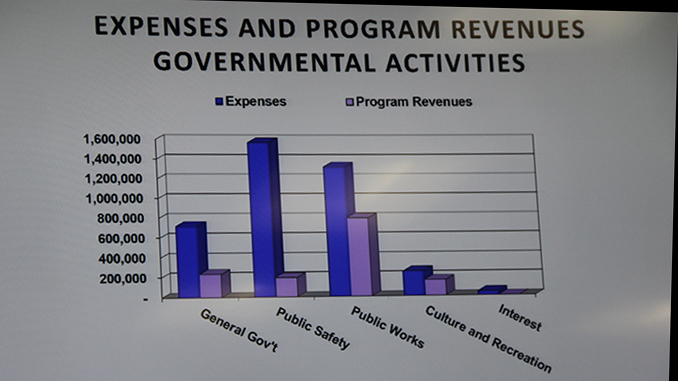 A graph labeled Expenses and Program Revenues Governmental Activities shows the difference between cost and revenue from different governmental programs. The categories are General Government, Public Safety, Public Works, Culture and Recreation, and Interest. Beard said the highest cost category is typically the same in most communities, Public Safety.

In Rockford’s case, the price tag for public safety is the highest at just under $1.6 million annually.  “Like every unit of government, Public Safety is the most expensive, it has the greatest number of personnel.” It is a not-uncommon misperception that law enforcement pays for itself through fines and tickets (or at least this is what Chief Jones has said over the years). In fact, municipalities realize very little revenue from law enforcement and actually spend a significant amount on this budget item.

Beard said the dynamics were the same in his last management position, Otsego. “In Otsego, if we wrote a ticket we only received about $7 of the amount of the ticket.” He said most of the money associated with tickets and fines go to the organization that incurs most cost from law enforcement, in Rockford’s case, Kent County, which operates jails, magistrates, courts and other county responsibilities. 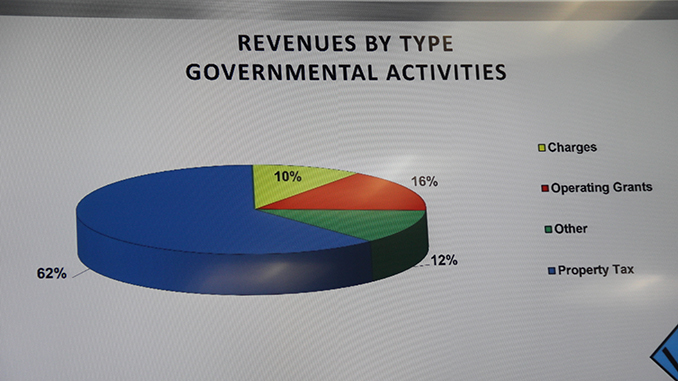 The next chart was Revenues by Type, Government Activities. Sixty-two percent is tax income, 16 percent is grant income, 12 percent is other and 10 percent is charges. Beard said in this graph, clearly the majority of City income is tax revenue. He also noted that 16 percent in grant money is very good. It is used for a variety of projects from some sidewalks to boardwalks.

In General Fund Revenue tax income for 2018 is just under $3 million, up from over $2 million in 2014. Beard said this indicates the increase in taxes from the tax increase of two mills nearly two years ago. This past tax cycle is the first where the city saw implementation of the increase. It also represents an increase in property tax values as Rockford, and the country, come out of the recession as well as an increase in home due to new construction. 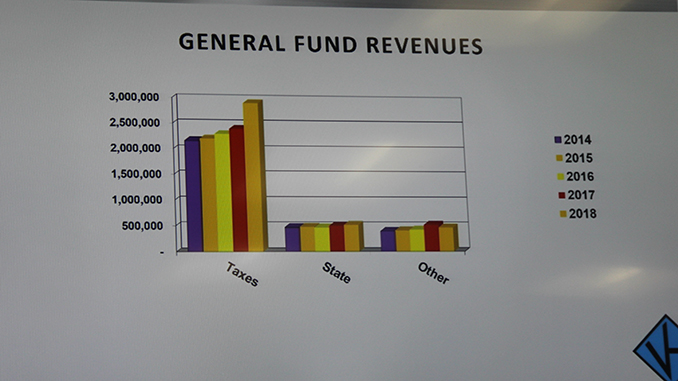 Beard said state income sharing, pictured in the graph, has not declined particularly, which is a good thing. The category of other represents all other income, which could be anything from grants, fees, income from services.

The next graph shows Property Tax Revenues over the past decade, beginning in the disastrous year 2008 which began a cycle of low property tax value. In 2008, values in the city had dropped to under $2.5 million in tax income which only in the past couple years has increased. 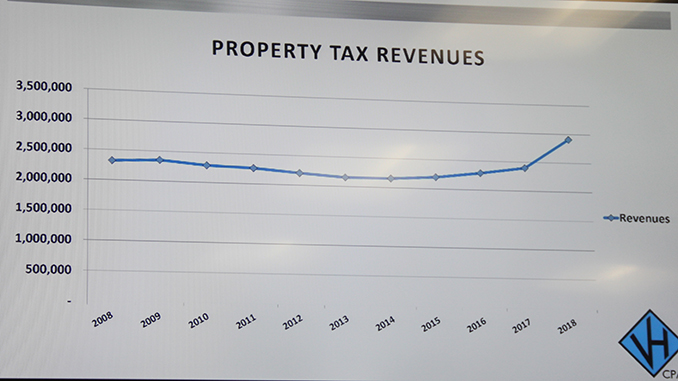 Beard said the chart shows 2013 and 2014 where the bottom, and said every city across the state struggled through the difficulty of finances then. Rockford, like all other cities, reacted by cutting services and collaborating where possible. He said that was the time when Rockford began implementing a combined Public Safety Department, which saves the city hundreds of thousands of dollars annually.

The next chart, labeled Expenditures by Function, General Fund, illustrates the categories of General Government, Public Safety, Public Works, Recreation and Transfers Out. The significant increase in Transfers Out largely represents the money used to fund the street projects of this past year. He said any capital improvement from any department, roads, water or sewer are represented in this category. 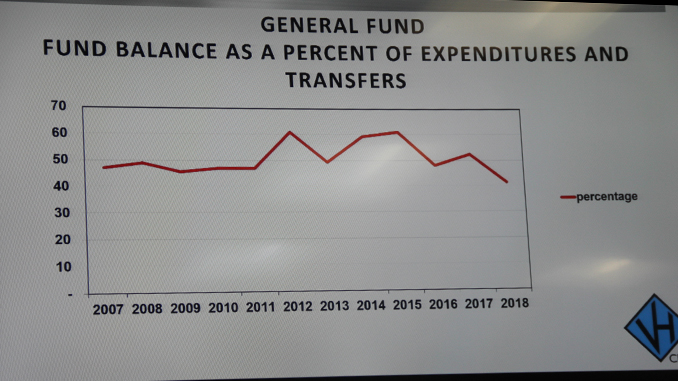 General Fund Fund Balance as Percentage of Expenditures and Transfers shows the percentage of the General Fund that is, according to Beard, “in the bank for a rainy day.” He said there is any number of opinions among professionals as what this number should be. He said it falls under two categories, designated and undesignated. Designated funds are those slated for a particular upcoming expense, like the anticipated purchase of a fire truck. Undesignated could be for any cost not anticipated, an emergency.

“We’ve been very healthy there. There is a lot of discrepancy there, depending on who you ask [on how much to fund this type of account].” He said the graph shows the amount as a percentage of the entire budget, and it equals about 40 percent of the entire budget for the city. He said this amount prepares the city in the case of another 2008, where income is significantly lost. “It would allow us to keep things in the status quo for awhile.” 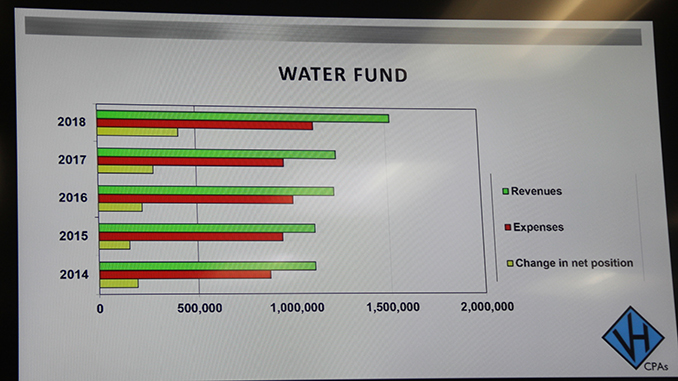 The Sewer and Water Fund graphs show both of these budgets, which are Enterprise Funds, meaning they have to pay for themselves and be kept to themselves. Beard said all money from sewer revenue goes back to the sewer account and the same with the water account. Theoretically, these funds could be borrowed from by another part of the budget, but would have to be paid back and with interest in a timely fashion, so that really doesn’t happen.

Sewer and water are connected, but are not identical. Sewer use is dependent on water use, since input to the sewer system first comes from the water system. Costs to both include wages, improvements and maintenance, among other expenses. “Across the state all units of government have this,” he said. In Otsego, his former management job, the city was the sole owner of the sewer plant, while Rockford is a co-owner of the PARCC-side Clean Water Plant on Coit Avenue.

Beard said the good news here is the cost to provide sewer revenues are up slightly. “Water consumption is up as well.” He said this was a hot summer, and new construction is definitely a factor in increased water use.

The sewer fund shows $2 million in revenue for 2018 compared to just under $1.8 in expense, a significant increase in change from the previous year. Beard noted that sewer and water don’t match dollar for dollar because treating sewer is much more expensive than pumping water.

Overall he is very satisfied with the results of the annual audit.

“It was a good audit, it was a clean audit with no discrepancies. Revenues are up, expenditures are under control, there were no surprises.”