People in the City of Rockford may have noticed, or not noticed, a strange tableau positioned on a park bench in front of the United States Post Office building on Courtland Street in downtown Rockford Wednesday, January 9.

A gentleman came into the Squire office around 3 p.m. to ask if we would be interested in exploring what he considered a mystery and described his visit earlier in the day to the Post Office. He was walking up to the building from the sidewalk and saw items placed on a public bench there that seemed not to be random. The items were a pair of men’s running shoes, a Time Magazine publication and an old-fashioned mans hat. There were footprints in the newly-fallen snow showing that someone had walked up to the bench and then away from the bench.

He said he’d gone into the building to ask staff if they knew anything about the three items on the bench. Josh at least, went out and looked at the items, but he and the other Post Office employees knew nothing about how the items came to be placed on the bench. 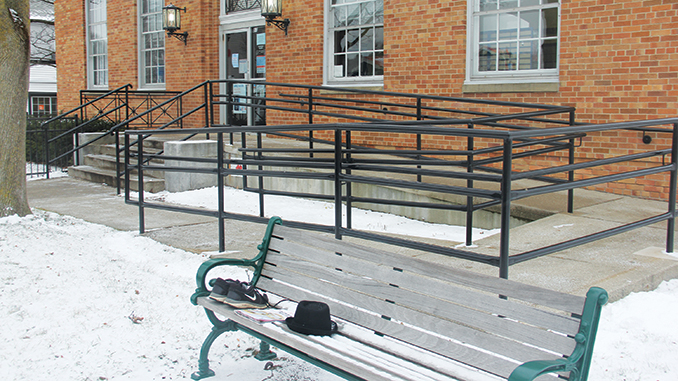 The Squire, likewise, went down to take a look and some pictures. The items were a black pair of Nike used tennis shoes, a Time Magazine dated April, 2017, and a mans hat made in China by a company called George. The magazine was a special feature, priced at $13.99 in U.S. dollars, called The Science of Marriage All About Attraction * What keeps love strong * Making the Union Last.

We tried to look inside the shoe to see the size and noticed the shoes were full of snow. Upon reflection, that set the timeline for either the night before or early that morning, as it had been snowing overnight and in the morning. Additionally, it means the footprints we noted were likely NOT those of the person who placed the items on the bench, as the snow would have covered those up as well. Perhaps the footprints belonged to our friend who brought the display to our attention? Unlikely, since he had mentioned the footprints in his description of the odd affairs.

The shoes, the magazine and the hat did not walk themselves to the park bench. The placement makes it unlikely the items sat on the bench with a person who then walked away without them. The items seem strangely specific in regard to making a statement of some kind.

We ask our readers to help us figure out this mystery, or at least provide us with some imagined scenarios that could provide an explanation to this mid-winter mystery in downtown Rockford. Send them to squireproof@gmail.com. Maybe together we will solve this mystery or come up with some creative stories of invention that we can share for our readers’ enjoyment.