Heroic actions stopped teen from jumping off the dam

Rockford’s regular Monday, January 14 meeting opened to a nearly full council chamber as four first responders were honored for their quick action in a life-threatening situation. Rockford Police Chief Dave Jones introduced three of four city workers who are cross-trained as first responders who were in attendance that evening to be recognized.

According to Jones, the four men, Jason Stoll, Josh Kleefisch, Ken Phillips and Dave Jehnzen, were all by the dam spillway putting up the city’s holiday lights. “Jason noticed a teenaged boy sitting on the dam railing with his feet dangling over the spillway. Jason walked over to the teen and asked him to get down from the railing because of the inherent danger. The teen then jumped on to a concrete ledge below the railing. Josh took hold of the teen’s arm to prevent him from falling onto the concrete spillway below. Josh Kleefisch, who was working with Jason, quickly stepped in to take hold of the other arm while both men held the teen back from falling. 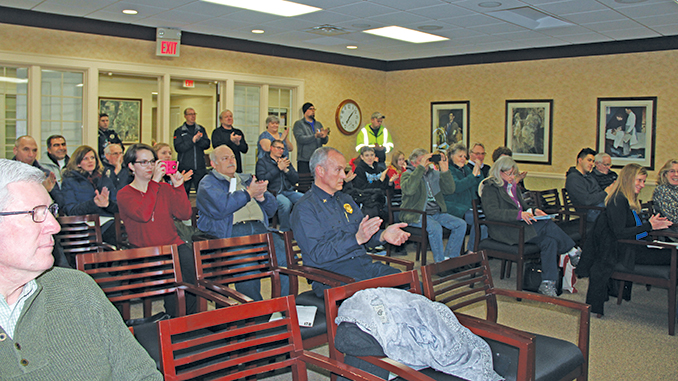 “Fellow workers Ken Phillips and Dave Jehnzen ran to the assistance of Jason and Josh. The four men were able to pull the teen back to safety from the ledge. They continued to restrain the teen, who was trying to get  away, until police and ambulance personnel arrived. Police later interviewed the teen, who admitted he intended to jump in the dam in an attempt to harm himself. The quick action of Jason Stoll, Josh Kleefisch, Ken Phillips and Dave Jehnzen prevented the teen from harming himself and for that we would like to recognize their heroic efforts today.”

Mayor Cheryl Scales said, “This is a wonderful award for the Department of Public Services.” City Manager Thad Beard said it is known that the City has wonderful employees. He said the men acted spontaneously and appropriately in an unexpected situation. He said it is right to honor their actions in a formal and public setting. The entire audience and city staff applauded the fast actions of these four men.