Sometimes I get answers to the “Nugget”  just after  the column has gone in to the paper with the names of those taking part included. A day after the time to answer the last matching quiz ended, I received a reply from Nancy Patterson (RHS Class of 1957). The letter came from Lebanon. Ohio. I have heard from her before when she shared historical information from her Rockford days. I want to thank her for taking the time to contact me. She scored 90% on the quiz. 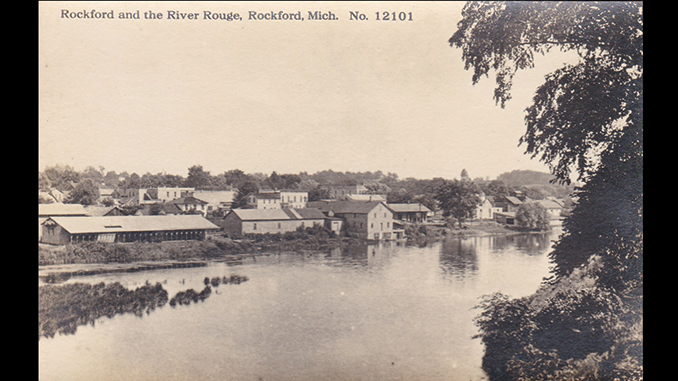 Recently I was asked about the naming of the river that flows through our town. The question was “Why do some Rockford postcards identify it as the “ROGUE” and others as “ROUGE”.  When I present programs on the history of Rockford, I show postcards of the river with the name one way or the other. The postcards are from early in the twentieth century (1900-1920 roughly) and usually were published by Rockford Druggists. I believe that sometime in a past column I gave the facts about the naming of the river, but I am going to repeat the information again. To me it is very interesting. 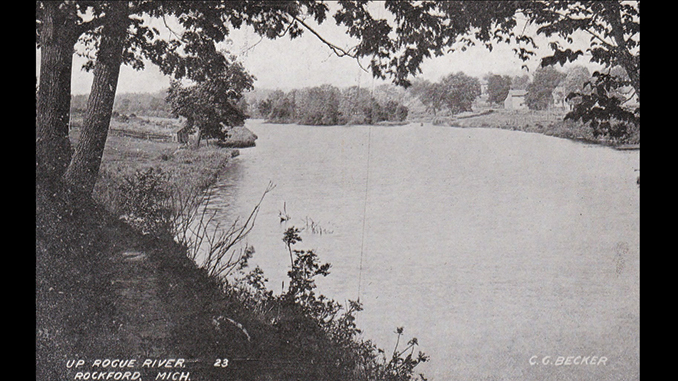 In 1837 deputy surveyor, General Lucius Lyon of Grand Rapids, sent a group to survey the Grand River north of Grand Rapids. Any tributaries were to be noted on the survey and a man, James Morrison, from the River Rouge  area of Michigan,  was given the honor of naming the first tributary. The first one found was the one we all know and he named it the “ROUGE” but spelled it “ROGUE” in his survey notes.

Over the years, both names appeared on documents and there was some confusion. One map might have the river spelled one way and another map the other way. A good question might be “How long did this two name situation continue?”

Officially, there was no action taken until February 1952 when a resolution sponsored by the Newago and Kent County Boards of Supervisors and the Michigan State Department of Conservation was given to the U.S. Board of Geographic Names in Washington D.C. asking that the name of the river be spelled “ROGUE”.  A little over a year later in May 1953 the spelling “ ROGUE”  was made official. This was 117 years after Mr. Morrison made his spelling error.

The two postcards with this column show the two spellings. The postcard showing the town uses the name “River Rouge”. The company that printed it was located in Grand Rapids. The other postcard showing a river scene and having the spelling “Rogue River” was printed by a Rockford druggist C. G. Becker.

Readers who have more information on the use of the river’s name are encouraged to contact me by email (tnjkonkle@hotmail.com) or by phone at 616-866-0530. I wonder if there are legal documents with the name “Rouge” or whether people of our town used the name. Let me know if you can help!

Finally, as always, please contact me with questions, comments, suggestions, ideas, concerns and especially corrections. Have a great, positive week!