The Rockford Area Museum (RAM) held a party billed as RAM Volunteer Recognition Day on Monday, May 13 at the Community Cabin.  It was hosted by Al Pratt, the RAM’s Director.  It was an event that Pratt and his Co-Director, Dick Johnston were planning when Johnston died unexpectedly in January.

The event was attended by approximately 40 of the 70 volunteers who have been active during the creation and early evolution of the new RAM.

During a brief talk, Pratt explained that those people have played a key role in the museum’s success.  They have been there during the formative stages of the museum from fund raising through the move to the new museum and up to the present when they serve as docents, help with special projects, do research, and in short, keep the RAM running to maintain a high standard for a small city museum.

Just as we recognize the Founders of our Historical Society who started the organization in 1967, and as our nation refers to our Founding Fathers, these dedicated volunteers have earned the title of Founding Volunteer whose contributions have been as important as the financial donations that the community provided to fund the new museum.  They were each presented with a new name badge that featured the title of Founding Volunteer and a Gold Star above their names.  These are the only people who will ever wear that badge or have that distinction.

Each volunteer received a colorful new pin to wear.  It features the RAM logo with the word “Volunteer” below.  It is hoped that they will wear them with pride and that the pins will stimulate some conversation about the great experience that volunteering at the RAM can be.  All future RAM volunteers will receive one of those pins as well.

Beard thanked the volunteers for their service and also took some time to update the group about things happening in the city and to answer questions.

Servaas gave an entertaining speech that told about his earliest days as a judge after his election in 1972 and other tales about some of his most interesting days in the  downtown Rockford courthouse and after the court moved to the new East Beltline location in 2009.

As President of the Rockford Area Historical Society, Terry Konkle also addressed the group to thank them for everything they have done.

It was a great way for everyone to socialize, enjoy some snacks and beverages, and understand their role in service to this community.

In closing, Pratt thanked everyone for attending and told them that he hoped they all were leaving with a renewed understanding of how important their efforts and dedication are.  He also urged them all to have at least one serious conversation with someone about the RAM’s mounting need for additional volunteers in order to keep the museum open 6 days a week and continue to increase its services to the area’s residents and businesses. 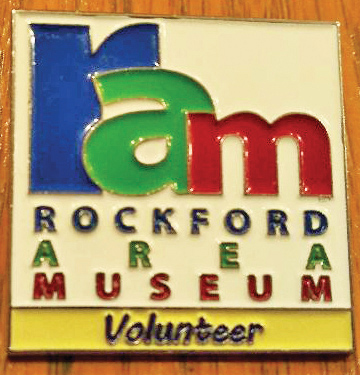 When you see someone wearing one of the new pins, talk to them about the RAM.  Learn about this hidden gem in our community. It is one that you may want to help with a small gift of time.

Even 3 – 4 hours a month would help and there is something for everyone from Middle School students to senior citizens to do.  If you could lend a hand with simple computer data entry, serving as a front lobby host, working on special projects as needed, or even cleaning, your help would be sincerely appreciated.  No experience is needed.  All you need is a desire to help and to have a good time doing it.

If you’d like to know more about the museum, volunteering, or the very affordable Historical Society memberships, take a moment to call the RAM at 616 866-2235 or Al Pratt at 616 485-4144.  You can also reach the RAM via email at rockfordmuseum@gmail.com