The Michigan PFAS Action Response Team (MPART) has received health-based values from its Science Advisory Workgroup that will be used by the Department of Environment, Great Lakes, and Energy to develop regulatory drinking water standards for per- and polyfluoroalkyl substances (PFAS) by April 2020, as directed by Gov. Gretchen Whitmer.

The Workgroup, reviewed the current science on PFAS and human health and identified health-based values for the following seven PFAS: 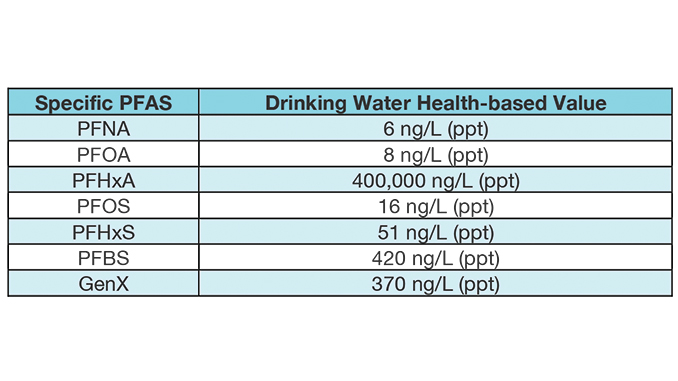 The Workgroup also recommended MPART and water supply operators work toward reducing contamination from other long-chain PFAS when found at levels above 6 ppt (parts per trillion).

“While there is not enough information available at this time to support health-based values and drinking water standards for them, these compounds are expected to produce similar health effects,” the report noted.  “Additional monitoring, research for potential sources, notification of the public and efforts to reduce exposure are warranted.”

“These proposed health-based values for PFAS in drinking water put Michigan on a path to potentially having some of the most advanced and far-reaching standards in the nation,” said Steve Sliver, executive director of MPART. “These findings are very close to the handful of other states that have made PFAS contamination a priority and underscores the need for federal leadership on research and standard-setting at a national level.”

The report highlighted the complicated patchwork of PFAS standards evolving at the state and federal level.

“Evolving science and professional judgement can account for the variation,” the report noted.  “The variation is not substantial, however, and the values are trending lower.”

As part of the required rule promulgation process, EGLE will host public hearings and accept public comments on the proposed standards. The final rule is expected to be adopted by April 2020.

MPART was a first-of-its-kind PFAS taskforce in the nation when it was launched in 2017.  Governor Whitmer formalized MPART as a permanent advisory body within EGLE in early 2019.

PFAS are a group of emerging and potentially harmful contaminants used in thousands of applications globally including firefighting foam, food packaging and many other consumer products. These compounds also are used by industries such as tanneries, metal platers and clothing manufacturers.

To stay up to date on other EGLE News, follow us at Michigan.gov/MIEnvironment