In 1987 the first  Golden “R” Reunion was held at the building on North Main Street that was the high school for most of the graduates who attended that first gathering. The idea for the reunion came from 1923 Rockford graduate Lyle Bennett. Mr. Bennett grew up in the Rockford area (about where Meijer’s is now), and was in the eleventh grade when our high school was destroyed by fire. Most of his senior year (part of the year the school was not finished) was  at the new high school on North Main, and he was one of thirty one to be in the first graduating class from the building.  He was an outstanding four sport athlete during high school, went on to Central Michigan College, returned to teach and coach at Rockford and eventually became a teacher coach at C.M.C. 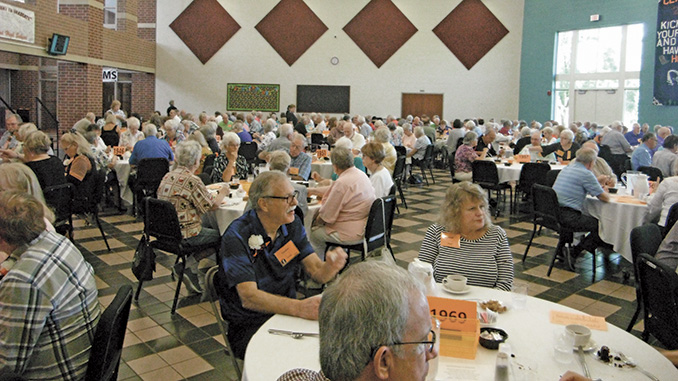 The “Golden R” was to be a reunion of Rockford graduates who had been out of school for at least fifty years. The first luncheon was very well attended and received much praise, so the committee that worked on it thought it should be a yearly function. The Rockford Area Historical Society (RAHS) helped sponsor the first event and two of the committee members, Clarence Blakeslee and Maxine Marcott, were society members who advocated for a meeting each year on the last Saturday of June. The meetings have followed that format since 1987 and have become a positive tradition.

On June 29, 2019 the “Golden R” met for the thirty-third  time. The meetings are held now in the cafeteria area of Rockford High School and are much, much larger because the graduating classes have grown over the years. Each year, of course, a new class becomes part of the group with the latest being the “Class of 1969”. The organizers also invite teachers, who taught the attendees, to join the festivities. For that reason my wife and I have enjoyed several of the occasions including the latest. They are very similar each year and the attendance is great! 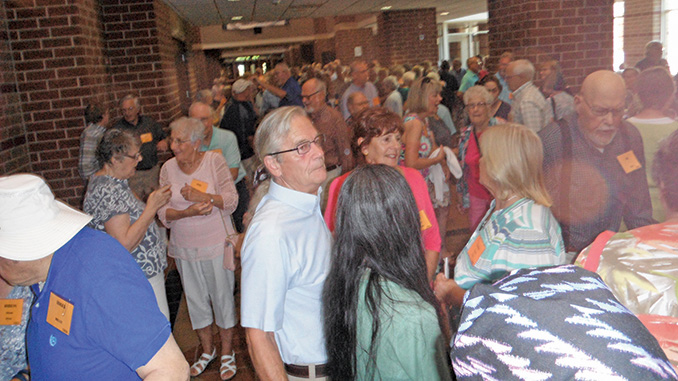 People  begin to arrive at 10:30 A.M. and can register and then meet and reminisce with friends. Each graduate is given a book that has information on Rockford graduates from 1922-1969. There is information including addresses for those living and death dates for many of the deceased. This project of compiling and putting together the books has been done for years by Ruth Knox Robinson.  I am sure she has had some help but basically she has headed up the project. There is a tremendous amount of information between the covers and many, including myself quite often, have made use of the book. Thank you Ruth for all of your hard work!

Because the luncheon part of the day occurs in the school cafeteria at 12:00 noon,  those  attending  have time to congregate in the hallways, have punch and socialize. My wife and I enjoy that part, and like many others, we keep looking at name tags to help us. We meet many former students and athletes that we haven’t seen in years. We also see many that come each year to the event. There is a lot of sharing and bringing people up to date.

After the cafeteria doors swing open, people are seated at round tables by class year. This year we sat with Chuck Burch, George Skinner and his wife Rebecca from the class of 1965 plus Jon and Carlene Stamp who were fellow teacher friends. Judy Critchell  Wooden (1963), who has been the chairperson for the last three years, welcomed everyone and introduced Larry Parrish (1964) who gave a  thoughtful invocation before the meal.

The master of ceremony for the day was Neil Blakeslee (1966) who handled the events after the lunch. Rockford Public School superintendent, Doctor Michael Shibler,  presented a short program detailing events and accomplishments of the school system. He also complimented those present and emphasized the importance of our supportive community. His talk  is very informative.

Every  year a scholarship is given by the “Golden R” group and Gene Berry (1954), as he has done in the past, went over  the  accomplishments  of this year’s recipient, Jack Grimm. Jack, who was very active in school activities, thanked the group and told of his future plans. Recognition of all alumni with over 65 years since graduation was done next with mention that Dorothy Keech Christiansen (class of 1936) was the person in the audience whose graduation year went back the farthest.  Neil also pointed out that the Burch family has graduates that date back to Rockford’s early history.

Traditionally, the new class  is welcomed by the class that went in directly before them, so Diane Nocera Ecklund (1968) did a nice presentation speech and Mike Selleck (1969) also did a clever acceptance talk. After Neil recognized the people on the “Golden R” committee, the last thing on the agenda is another tradition. All members of the audience who were veterans stood and were recognized for their service before everyone stood and sang “God Bless America”. Karen Vandenbosch  Postema  (1957) was the pianist and the event ended with the singing.

Before ending the column, I should mention that several classes also meet on their own , and many people make it a point to see each other during the weekend. Some graduates told me that they were going to visit the Rockford Area Museum. At least four told me that they had things to donate to the RAM.

Finally, please remember to contact me with questions, comments, concerns, ideas and corrections and HAVE A GREAT, POSITIVE WEEK!