The City of Rockford and the surrounding communities are blessed with a very active library.  The Krause Memorial Library serves in excess of 180,000 visitors each year.  The library has had two expansions in the past, resulting in the current size of 9,500 square feet, which is substantially smaller than the average library (15,770 sf) in the Kent County District Library (KDL).  What is interesting, is that even with the smaller footprint, the library continues to be very busy. 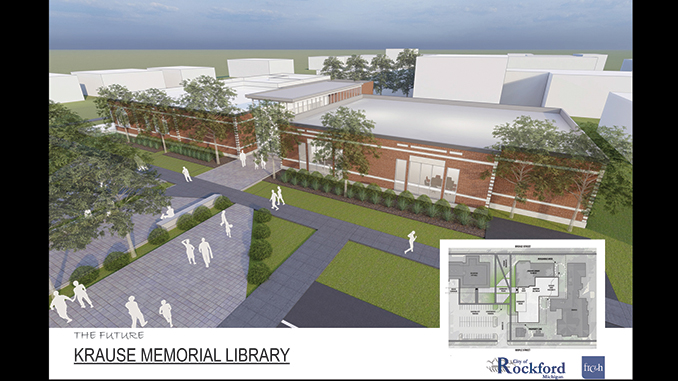 Following are some dramatic statics which reflect the building use:

Loans per square foot: 47.77 psf *most in district

Loans per capita 79.35 *most in district

In November of 2018, the City of Rockford and the Townships of Algoma, Courtland and Cannon all signed a Letter of Intent to appoint two representatives from each unit of government to form an Exploratory Committee.   The committee is charged with the task of pursuing a building expansion to meet the library needs all four units of government.

In May, of this year, the committee contracted with an architect from FTC&H to lead work sessions with residents from the four units to determine how the new library might look.  Renderings of the possible expansion follow.

In July, of this year, the committee will consider hiring a capital campaign consulting firm to complete a campaign feasibility study.  The objective of the committee at this time is to determine if there is funding available from private parties to help us build a library that meets the needs of the four units of government now and in the future.

The committee is still working on what the future name will be, but the most recent being considered is the North Kent Krause
Memorial Library.